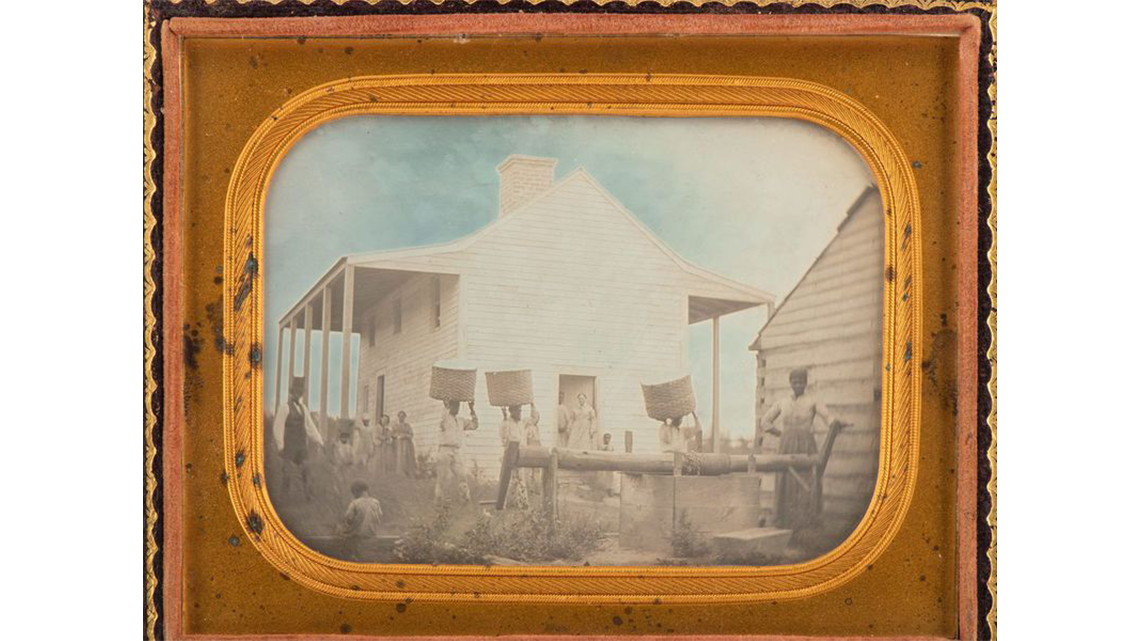 In the mid-19th century, a Georgia plantation owner posed for a photograph alongside a group of enslaved African-Americans. Three of the men tote large baskets of cotton over their heads as a small child sits on the ground nearby. One woman peers out of a doorway, while another stands with her hand on the crank of a well, staring straight ahead.

This more than 150-year-old quarter-plate daguerreotype was recently acquired by the Nelson-Atkins Museum in Kansas City, reports Maxwell Williams for artnet News. The photograph—believed to be the earliest known image of enslaved African-Americans with cotton—reveals how slavery extended beyond elite members of antebellum society.

The Hall Family Foundation, a philanthropic organization headed by the owners of Hallmark Greeting Cards and the Hallmark Channel, purchased the image on behalf of the museum in mid-November. Cowan’s, the auction house that sold the snapshot, had estimated the daguerreotype would fetch between $100,000 to $150,000. But after a brief bidding war, it sold for $324,500.

According to Cowan’s, the image was recently found in the estate of one Charles Gentry Jr., a former Georgia resident who later moved to Austin, Texas. Experts are not entirely sure of the daguerreotype’s provenance, but they think it was taken in Greene County, Georgia, during the 1850s and passed down through the Gentry family.

“Using the Gentry family in Georgia as a starting point, Federal Census and Slave Schedules were used to pinpoint the most logical original owner of the daguerreotype,” says the auction house.

Records indicate that just a few Gentrys were slaveowners in the mid-19th century, and only one of them, Samuel T. Gentry, owned at least 10 slaves—the number depicted in the daguerreotype.

Gentry, clad in a vest and top hat, is believed to appear in the left half of the image. Cowan’s speculates that a swirl of motion visible below his knees could be a dog straining at its leash, adding, “Such a denizen would hardly be a surprising element of plantation life, where the threat of violence was an everyday part of enslavement.”

There are other known images of enslaved people working with cotton, but these were taken later, during the Union occupation of Georgia and the Carolinas. The Gentry daguerreotype is also unique because it was not taken on one of the vast coastal plantations often associated with the institution of slavery. In reality, only an elite class of slaveholders was able to afford sweeping tracts of land and hundreds of enslaved individuals. Most others, including Gentry, owned a smaller group of people who worked on relatively modest homesteads.

“Samuel Gentry was no mere yeoman farmer, but neither was he a member of the upper stratum of the planter class,” Cowan’s explains. “In a world where wealth was measured by land and slaves, Gentry was simply a man who was striving for more; he was clearly ‘on his way up’ the socio-economic ladder.”

Gentry may have commissioned the daguerreotype to document his prosperity; the fact that enslaved African-Americans carrying buckets of cotton are featured prominently in the image is likely no accident.

Jane Aspinwall, curator of photography at the Nelson-Atkins Museum, tells Atlas Obscura’s Sabrina Imbler that the daguerreotype is unique in more than just subject matter: “A majority of 19th-century daguerreotypes were taken indoors,” she explains. “Anything as rare as this was super special.”

The photograph now joins the museum’s collection of daguerreotypes, which includes images of abolitionists like Frederick Douglass, Harriet Beecher Stowe and Lucretia Mott. Plans are underway to display the new acquisition, possibly within a broader context, Williams reports.

“This piece—a record of the historical crime of slavery—is remarkable both for the power of its content and for its technical and aesthetic sophistication,” says Keith F. Davis, the museum’s senior curator of photography. “This is an unforgettable rendition of an era, and a way of life, that must never be forgotten or forgiven.”