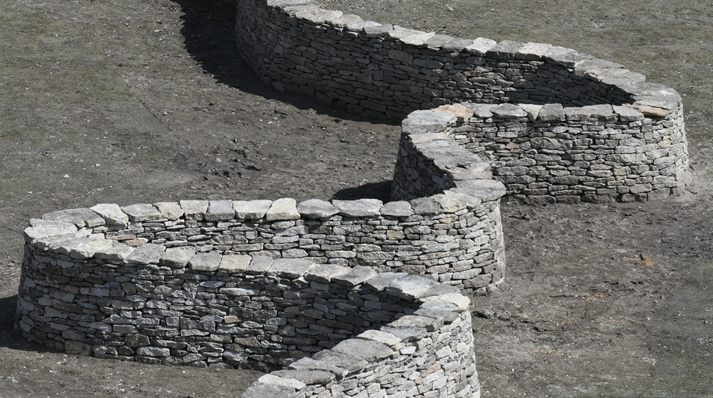 BY LAURA SPENCER, KCUR 89.3
In early March, a new wall started snaking its way through the grass just east of the Bloch Building at The Nelson-Atkins Museum of Art.

British artist Andy Goldsworthy’s “Walking Wall” begins with this section. In a few weeks, it will start to move across Rockhill Road, forcing the street to be closed from May 12 to June 3.

“I can’t really tell you how many times I’ve thought of taking a wall across the road. It’s such a beautiful poetic suggestion,” Goldsworthy says. “It’s a different way of looking at things: To wait for a wall to cross.”

When he proposed the work here, he says, “it was amazing. People at the museum really got it.”

In some ways, Goldsworthy’s wall will feel familiar. Old walls made of native rocks line many of Kansas City’s streets. William Rockhill Nelson, a real estate developer who founded the Kansas City Star, built “miles” of rock walls from limestone on his property where the museum now stands.

“It’s unusual to see so many agricultural-looking walls in the city,” Goldsworthy says. “These are walls that have a rough ruggedness, made out of the stone of the place. And there’s an honesty about them, which I really like.”

For Goldsworthy, it was important for his wall to connect to these older walls. So he traveled to the Kansas Flint Hills to collect stones, a mix of freshly quarried rocks, rocks from abandoned quarries and weathered stone.

“So I’ve mixed that in so it feels part of the place,” he says.

Goldsworthy has worked outside for more than 40 years, creating sculptures out of natural materials like leaves, branches, ice, and stone. In the late 1980s, he started building walls in Scotland, where he lives, and then in England.

In the United States, “Storm King Wall,” a 2,278-foot installation, twists and turns its way around trees and into a pond at Storm King Art Center in New York.

The Hall Family Foundation commissioned the installation in honor of Morton and Estelle Sosland, supporters of the museum and its sculpture park. The Soslands commissioned another work that was once controversial but is now considered iconic: Claes Oldenburg and Coosje van Bruggen’s four “Shuttlecocks.”

Having Goldsworthy’s wall cross Rockhill Road “sounded like the excitement that we as an institution needed to embrace,” says Julián Zugazagoitia, the museum’s CEO and director. “That is why art pushes the boundaries.”

As Goldsworthy installed the first section, Zugazagoitia says, “hearing the stones, the rhythm that it goes, it becomes very performative. As much as it is beautiful to see it in its resting state, when it is alive, it becomes an organism that is moving … a lot of activity to witness.”

It took 12 days for dry stone wallers from the U.K., working alongside builders from the U.S., to finish the first of what will ultimately be five sections.

“I think laughter is what keeps the wall going,” says James “Jammer” Throckmorton, who maintains art at the museum. “So there’s lots of banter and a lot of singing, especially on the cold and windy days.”

So far, Goldsworthy says, there’s been a lot of support for the wall, from people walking by with their dogs or their kids, taking photos and bringing “so many cakes.”

He anticipates there might be a shift when the “Walking Wall” starts to block traffic in May.

“But that will be the moment that will divide people who really like it and those who really don’t, because it will cause inconvenience, it will be disruptive, it will prevent you,” he says. “And that’s a very important part of walls, too.”

Goldsworthy’s “Walking Wall” will continue to travel across the museum’s campus into November. On its fifth and final stop, it will become a permanent installation in the sculpture park, part of it inside and part of it outside one of the Bloch Building lenses.