This Wall Was Made for Walking 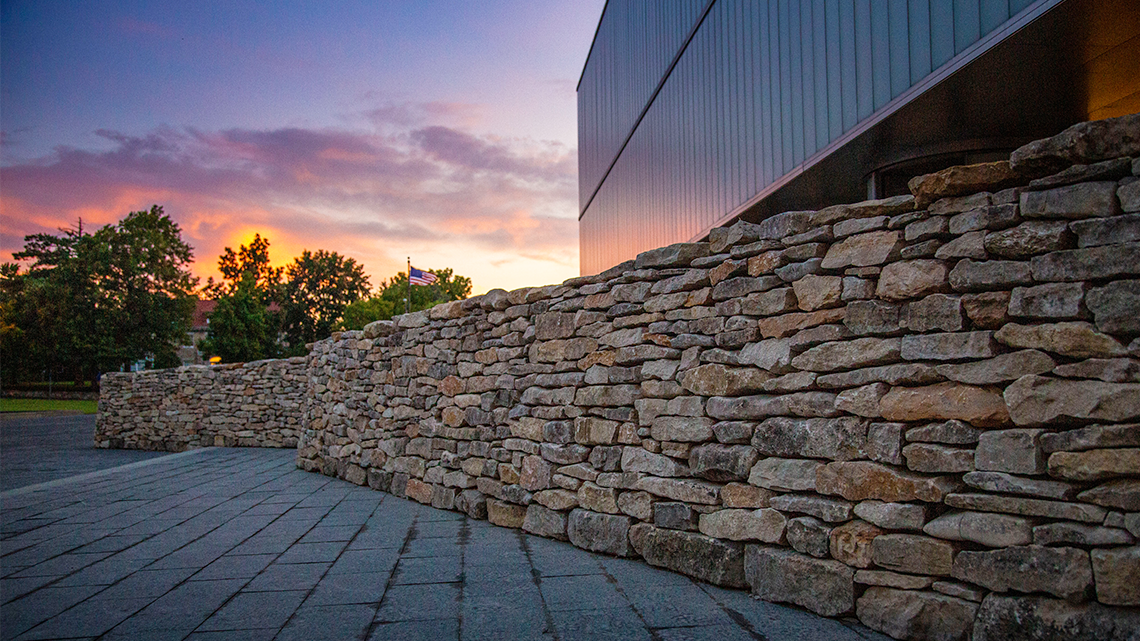 But the “Walking Wall” created by the artist Andy Goldsworthy at the Nelson-Atkins Museum of Art is an attraction in its own right, recalling centuries of wall-building craftsmanship. A slow-motion performance piece, the wall will come to rest in November as a 100-ton addition to the museum’s permanent collection.

For about 10 days every month, beginning in March, a team of British dry stone wallers has deconstructed the tail of the wall and moved the stones about 100 yards to the head, where they have rebuilt it.

That’s how the wall has “walked” a sinuous third of a mile, beginning on an open lawn, crossing Rockhill Road — temporarily blocking a four-lane commuter route — then threading its way between the museum’s neoclassical main building and the starkly modern Bloch Building addition.

“When it came around the front of the museum, there was a magical two or three days when you couldn’t really see either end, and it looked as if we’d walled in the museum,” Mr. Goldsworthy said, recalling a moment earlier this summer. “One person came up to me as I stood looking at it and said, ‘It must be a political statement.’”

It is and it isn’t. “In Britain, many of the walls date to the Enclosure Acts, when people were put off the land, and a lot of those people came to America,” Mr. Goldsworthy said. He came up with the idea of the “Walking Wall” before President Trump made a border wall his signature campaign issue, “so in many ways, it’s nothing to do with his wall,” the artist added. “But all his talk of the wall and borders is going to be written into this work. It’s quite extraordinary that it’s being made in this year of all years.”

As an artist, Mr. Goldsworthy is best known for ephemeral works that he creates himself, using materials found in nature. But for this project, he was largely hands-off.

“I love making things, so I don’t delegate the responsibility of the making easily. But I have to keep this overview of what’s happening; I can’t be up close with my hands on the stone,” he explained, adding, “And these guys just do a better job of it than I would.”

“These guys” are four British dry stone wallers: Fife Gibson, Edd Smith, Gordon Wilton and his son, Jason Wilton. They are all experts in the ancient craft of tightly stacking stones to make sturdy, permanent walls without the use of mortar. (In Kansas City, they have been assisted by a rotating crew of about a dozen assistants from Britain and the United States.)

Gordon Wilton, a 72-year-old former farmer from Derbyshire, is the longest-serving of the group. He helped build the 2,278-foot wall at Storm King Art Center in Cornwall, N.Y., over 20 years ago. Despite a recent double hip replacement, he and his son still operate their own business in England, building walls for farmers and homeowners. But they do so much work for Mr. Goldsworthy that their own customers now face a two-year wait.

“After I finished school, the art teacher wanted me to go to art college,” Gordon Wilton said. “But my family wasn’t rich; I needed a job to go to, so I went into farming.”

He spent the next two decades as a laborer at Biggin Grange, a large farm in Derbyshire. He built cow sheds, did the milk run, put up hay and repaired dry stone walls. That was how he came to know a neighboring farmer.

“He was a good dry stone waller,” Gordon recalled. “I was rebuilding a gap in the wall that the sheep had knocked over, and he says, ‘There’s some walling competitions coming up. The Derbyshire branch one is in a few months. You’re pretty good, you should have a go.’”

For the purposes of competition, an existing wall is marked off in numbered sections of two and a half meters, or about eight feet. Competitors pick a number out of a hat and then have seven hours to take their section down and rebuild it stone by stone, with judges awarding points for the quality of their work in several categories.

Mr. Wilton didn’t win on that first try, but he did well enough to keep entering. He won his local competition the next year, then entered the Dry-Stone Walling Association of Great Britain’s championship competition.

“There were 12 or 14 different competitions in Scotland, Wales and England,” he said. “You got so many points for a win, so many for second, just like in car racing.”

“I think I come about fifth,” Mr. Wilton recalled. “But the next year — two years on the trot — I actually won it.” At that point he was, at least arguably, one of the best wallers in the world, and that’s when Mr. Goldsworthy recruited him. The “Walking Wall” in Kansas City is, by Mr. Wilton’s reckoning, about his 60th job for the artist.

Mr. Goldsworthy appreciates the skill and work ethic required in walling. “It’s not just lying on the stones. It’s the ability to do that all day long, and the rhythm that that labor brings to the piece,” he said. Mr. Goldsworthy worked on farms himself as a young man and said that experience “was as important, if not more important, than the art school, as a place to learn about dealing with materials and the land.”

Is walling, at least at an elite level, an art in its own right?

“It’s in the realm of craft,” Mr. Goldsworthy said, “though once in a while you see a farmer who’s done something really crazy and think, ‘That guy may be an artist.’”

Mr. Wilton was unequivocal. “Walling’s got to be an art form, because they’re using it for art,” he said before reminiscing. “I was quite good at art and stuff; mainly drawings, and paintings. I suppose if I had my life to live again, I probably would go to art college.”